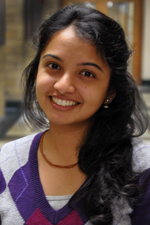 As an undergraduate, Roshni completed the Undergraduate Leadership Certificate Program, the Business Enterprise Certificate Program, and the Cooperative Engineering Education (Co-op) Certificate.  She was chosen the 2011 Northwestern University Co-op Student of the Year and the 2011 National Co-op Student of the Year. As a member of a team at Baxter, she received an Invention Award for New Patent Application for developing a device for a Home Hemodialysis System. Through the Global Healthcare Technologies Study Abroad Program, Roshni had the opportunity to study at the University of Cape Town, where she developed a breast-milk pasteurization system to prevent HIV mother-to-child transmission. It was then that she "recognized her passion for global development, especially health and environment." As she pursues her Master's she sees her "task as innovating simple solutions. . . to improve the quality of life worldwide" - an ambitious, but attainable goal for someone who was described as "a force of nature! The epitome of excellence at work, in the classroom, and in the community, an outstanding engineer and an exceptional employee, Roshni has become one of the most valued members of our team (at Baxter). She is gifted, extraordinarily hard working, and . . .will accomplish (much) in the future."