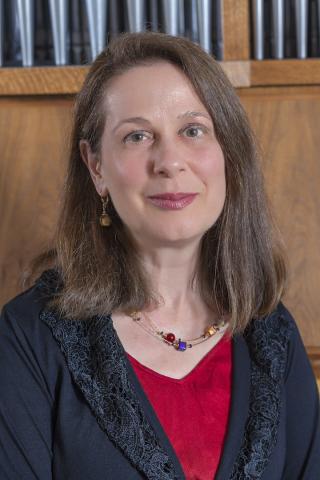 Music theorist/organist Diane Luchese is a Professor of Music at Towson University. Since joining the faculty in Fall 1999, she has been teaching courses in music theory, aural skills, counterpoint, and analysis. Before her appointment at Towson, she taught at the Ohio State University, Chicago Musical College, New England Conservatory, and in DePaul University's Community Music Division. She previously held positions as an organist/choir master in the New York, Boston, and Chicago metropolitan areas, and currently freelances as a church organist in the Baltimore area.

Luchese's research interests include counterpoint; pedagogy as informed by cognition research; curriculum development; rhythm, time and motion; and the musics of Bach, Hildegard, Messiaen, and Ligeti. Accordingly, she has presented papers at numerous conferences, which include meetings of the Society for Music Theory, the International Society of Hildegard von Bingen Studies, the First International Congress on Messiaen Studies, the International Congress on Medieval Studies, the Symposium on Music and Nature, and the Bridges International Conference. In 2010 she contributed a chapter to Olivier Messiaen: The Centenary Papers, published by Cambridge Scholars Publishing. Her articles have been published in Sonus and The American Organist. Luchese has performed recitals throughout the northeast, and especially enjoys performing early and contemporary works. In 2009 she performed John Cage’s Organ2/ASLSP in a 15-hour uninterrupted performance at Towson University, and in 2012, Cage’s centennial birth year, performed an 11-hour realization at the nief-norf Research Summit held at Furman University. She recently recorded a CD of contemporary organ music featuring Baltimore pipe organs, which will be released on the Raven label in summer 2015. Luchese earned a Ph.D. in music theory from Northwestern University, Master of Music degrees from the New England Conservatory in both music theory and organ performance, and a Bachelor of Music in organ performance from the Manhattan School of Music, where she was awarded the Bronson Ragan Memorial Award for Excellence in Organ. Her organ teachers include Yuko Hayashi, Frederick Swann, and Paul-Martin Maki. She also studied composition privately with M. William Karlins and Robert Cogan.

Reflection on the Alumnae Fellowship: "I was honored to receive the Dissertation Fellowship at Northwestern. When at the dissertation stage, I was a single, female musician living alone, already financially strapped with the loan debt from my previous two master degrees. Because of all my work responsibilities, I found it difficult to find sufficient time to make the progress I needed. Receiving this award made it possible for me to concentrate entirely on my research. In addition to the financial support from this grant, being among the "chosen women" that year gave me a boost of confidence, which was sorely needed to combat the uncertainty, inexperience, self-doubt, and insecurity that all accompany a huge and daunting task never done before! From time to time since completion, young scholars working on their dissertations contact me after reading mine as part of their research. Each contact reminds me of the immense gratitude I have for receiving the fellowship."