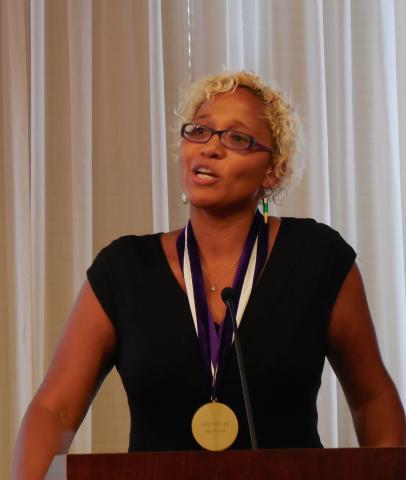 Susan ("Susie") Phillips, associate professor of English and associate department chair, Weinberg College of Arts and Sciences, is the recipient of the 2014 Alumnae Teaching Professorship Award. The three-year award honors a tenured faculty member for excellence in teaching and curriculum innovation.

A medievalist who “brings the past to life,” Phillips is admired by her colleagues for her “academic brilliance” and by her students for infectious enthusiasm and innovative assignments. She teaches courses on late medieval and Early Modern book culture, medieval literature and culture (with an emphasis on the representation of sin and confession, heresy and rebellion), drama, Shakespeare and Chaucer. Her course on Chaucer’s Canterbury Tales concludes with a full-dress performance of one of the tales and counts as the final exam. Her courses on Shakespeare not only incorporate students’ favorite poems and pop songs, they include visits to the Deering Library Special Collections and trips to the theater for a live performance.

Phillips has published essays on later medieval pastoral practice, Renaissance dictionaries, gossip theory and medieval multilingualism. Her first book, Transforming Talk: The Problem with Gossip in Late Medieval England (Penn State 2007) explores the religious, cultural and literary work of “idle talk” in late medieval England. Gossips’ supposedly idle words, she argues, are transformative; they blur the boundaries between people, discourses, genres, and religious and cultural practices. Her current project, titled Polyglots and Pocketbooks, traces the cultural history of the dictionaries, phrasebooks and guides to conversations that flooded the European marketplace from the 15th through 17th centuries.

Professor Phillips, on the faculty of the English department since 2003, completed her Ph.D. and M.A. at Harvard University. She also earned a master’s degree from Cambridge University and graduated from Harvard and Radcliffe Colleges with a B.A.

Phillips is a recent recipient of the Weinberg College of Arts and Science Award for Distinguished Teaching in 2008 and the Alice Kaplan Institute for the Humanities Fellowship in 2009.

Letters in support of Professor Phillips’ nomination are filled with accolades and words of praise from faculty and students:

• “Students speak again and again of the engaging, accessible ways she brings Chaucer to life.”

• “One of her amazing talents is the ability to memorize the names and faces of all her students -- within a week or two.

• Her genuine interest in each student is seen in the time and attention she gives to students’ essays and papers.” • “She has had a profound effect on my writing…my prose is clearer, more concise, and more scholarly,” writes one student.

• Another said, “Her feedback on papers alone is worth the cost of tuition.”